Impressive Sushi recipe which is fairly easy to prepare but looks like it has taken hours. 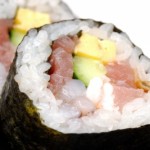